How Comics Used to Be Printed

These days, there are comic books found everywhere. What used to be just a newsstand product is now on the Internet, in bookstores, and airplane kiosks, thanks in part to the enormous advances made in printing technology.

Printing comics was a painstaking process that began back with the Gutenberg press. In the 21st century, it is now a sleek operation that can apply all four colors at one pass through the printer and print multiple copies in the blink of an eye.

The History of Printing and Comics

The first published book was The Diamond Sutra, printed in 868 C.E. China. Innovative printers like Bi Sheng and Wang Zhen created movable types and a revolving table to hold the type over the next centuries in the Eastern world. The printing process itself began in Europe with the Gutenberg printing press’s first run in 1440.

Comic books like The Adventures of Obadiah Oldbuck were printed in several non-English languages in Europe before coming across the Atlantic with an English version in the 1840s.

The first appearance of an American comic was in 1896 on a Sunday morning when the  Hearst New York American ran a strip called “The Yellow Kid” by Richard Felton Outcault. The sole run of this Sunday funny and the technological marvels of printing started a comic revolution that gave birth to Superman, Spiderman, and Wonder Woman.

After Outcault’s contribution to the Hearst New York American,  comics’ popularity sky-rocketed. Soon comic strips were running in every major city newspaper across the country. A printing company started to amass and publish collections of past strips, making them technically the first comic books in the United States.

Up until the superheroes flew onto the scene in the Golden Age of comics, comic strips could mainly be found in newspapers, with an extra colored installment for the Sunday edition. It wasn’t until Action Comics #1, in which Clark Kent and Superman single-handedly created the classic comic book format.

What ensued was known as the Golden Age of comics. Except for a slight dip during WWII, comic books’ popularity surged until the 1950s, when a group of comic book authors collaborated on the Standards of Comics Code Authority. The Code, as it was known, put restrictions on what you could and couldn't depict in comic books, and it took a lot of the fun out of the industry.

Luckily in the 1980s, after the Code was long dismantled, a fresh wave of authors and artists hit the newsstands, and a different kind of hero was born. Stan Lee and Marvel comics are as popular today as they were then, possibly even more so if you count the movie franchises.

What is Offset Printing?

For the first generations of comic books, each comic book’s panels were printed using offset printing. This lengthy process entails making a metal engraving for each page, which is why you never see runs of only a few copies with this particular printing method; it would be a wasted effort.

Once the individual plates are engraved, they’re put into the printer and then rolled with ink. The images are then transferred to the roller, which can then be printed onto paper. There are multiple rollers for the main process hues of yellow, cyan, magenta, and black.

Since it was so troublesome to engrave each plate with each page, you needed to print a large number of copies to make it practical. Often wedding invitations are printed using offset printing methods, so the price per card gets cheaper the more print runs you have.

The Creation of Color Comics

Originally, comics were printed onto cheap pulp paper using a cumbersome four- or five-color system without the speedy benefit of full-color printing methods (today, comic books are printed in full color all at once). Each color had to be applied using the dot system, so it took much longer.

This time-consuming system was replaced in the 1950s with the Ben-Day dot printing system. Using the four process hues – magenta, cyan, yellow, and black – but adding the ability to vary the spacing or even overlap these dots made Ben-Day a perfect technique for cheap and easy shading and tonal shifts, and mixing these shades for lines or shadowing.

How Comics Were Printed

Using newspaper presses, two comic pages would be printed on one sheet of paper, after which the sides were trimmed to cut it down to the correct size with a three-knife cutter.

It’s crucial at this stage to get the right page to correspond with the left, so if page 2 is on the left side, page 42 is on the right. For the next sheet, page 3 will be on the left-hand side and 43 on the right. This way, when it is bound, the pages will be in numerical order.

Since it is a saddle-stitched book, the pages are then stapled (or sewn) through the spine. The other option is a perfect-bound book, which sports a spine, but you need a minimum number of paper sheets to support it.

During the comics revolution of the 1980s, comic book publishers have taken advantage of the form’s expressiveness. Writing and designing a comic book or graphic novel is now a creative way to add to literature or art; it’s not relegated to the Funnies Pages of your local newspaper. 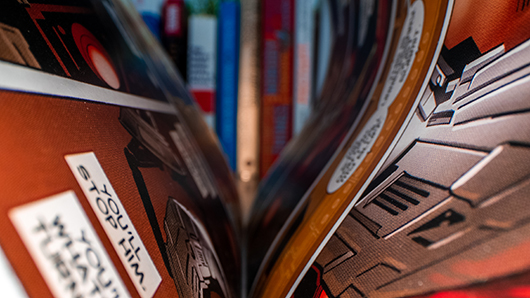 With modern, full-color printing and super fast turnaround, it’s hard to remember that printing comic books used to be so laborious, especially if you weren’t just printing in black and white but in painstaking color as well.

These days, if you partner with a printer professional like those at Comix Well Spring, you don’t need a graphic design degree to make your creative ideas a reality. With our tools and resources, you can take that dream of a story and turn it into an actual comic book. Contact us today to explore your printing options.